Posted on November 6, 2012 by andy dingfelder 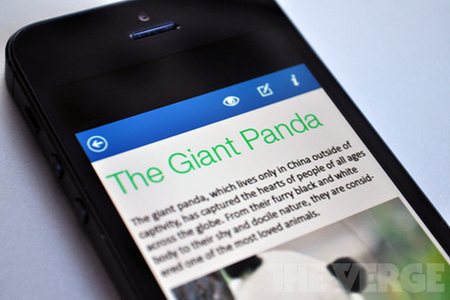 Microsoft’s Office for iPad, iPhone, and Android is a reality. Although Office Mobile has been rumored and reportedly spotted in the wild, Microsoft has remained persistently quiet about its plans for the product.
Now it sounds like the company will release Office versions for Android and iOS in early 2013.

Office Mobile will debut in the form of free apps that allow Android and iOS users to view Microsoft Office documents on the move. Like the existing SkyDrive and OneNote apps, Office Mobile will require a Microsoft account. On first launch, a Microsoft account will provide access to the basic viewing functionality in the apps. Word, PowerPoint, and Excel documents will all be supported, and edit functionality can be enabled with an Office 365 subscription.

Microsoft will allow iOS users to purchase an Office 365 subscription within the app, or let organizations distribute codes to enable Office Mobile editing for users. The apps will allow for basic editing, but we’re told this won’t go very far in attempting to replace regular full use of a desktop Office version.

A recent Microsoft press release from the company’s Czech Republic subsidiary revealed that Office Mobile apps for Android and iOS would be made available from March 2013. We understand that Office Mobile for iOS will arrive first in late February or early March, with an Android version due in May.

We reached out to Microsoft for comment on this story and a company spokesperson says “Office will work across Windows Phone, iOS and Android.”

Andy has over 20 years of technology leadership experience in Software Testing / Development / Project Management and Team Leadership in multiple industry sectors, including: Telco, Healthcare, Technology and government. He is currently working as a Senior Test Consultant for Planit Software Testing. Master's Degree in Public Information Information Systems, and over 10 years of board governance experience for multiple organisations. Full bio is available at: http://www.linkedin.com/in/dingfelder Follow him on Twitter at http://twitter.com/dingfelder Andy Dingfelder lives in the Wellington region, New Zealand with his wife and two daughters.
View all posts by andy dingfelder →
This entry was posted in Apple, Mobile, windows. Bookmark the permalink.